Failure curves and P-F intervals linked and explained: Tying the two most important reliability engineering curves together to generate a better picture of failure 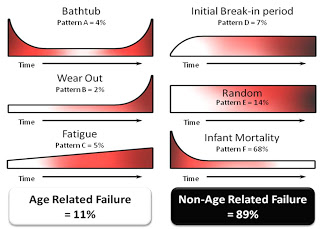 During the early development of what would become Reliability Centered Maintenance, Nowlan and Heap gave us six failure curves to the left. When folks first see that sixty eight percent fall into the infant mortality curve then the doubt fairy tends to show up. "Sixty eight percent of the failures in my facility are not instant or early on start up." With this thought they then discount the incredibly important failure mode data provided to us from these studies. What they are missing is the connection to the P-F curve below. 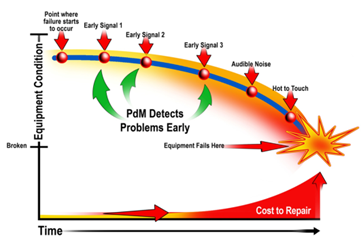 So if the failure curves show the probability of defects introduced over time based on an individual failure mode then the P-F shows the resistance to failure over time once the failure defect has occurred. Nolan and Heap did not say that sixty-eight percent of your assets will catastrophically fail on or near startup they said that sixty-eight percent will have a defect introduced that will then travel down the curve of the P-F becoming more prone to functional and catastrophic failure. This trip down the curve may take 5 days, 5 weeks, or 5 years depending on the failure mode and operating context. This means they don’t fail instantly, but they do fail prematurely because of the defects introduced during or shortly thereafter maintenance activities. So think of the six failure curves as the probability of introduction of a defect and the P-F as the path of that defect to functional and catastrophic failure. I hope this helps you send the doubt fairy packing and you can begin to better understand both curves and the additional knowledge they can provide.

For more blog posts like this, check out Shon's Blog:

This topic along with many others are what we specialize in to take your training efforts to the next level. See what would be the best fit for you and your facility!

More Preventive is Not Necessarily the Answer

FMEA: Its Not Just for Maintenance Anymore